Edit
watch 01:36
We're Getting Mutants in the MCU - The Loop
Do you like this video?
Play Sound

The Siege of Marali was a prolonged military occupation undertaken by the Black Hand and Alliance in the year 426. The campaign was spearheaded by the Twins, who were two of the highest-ranking commanders under the Black Hand’s leader, Elefin. The Twins maintained control of Marali for roughly half of the year, before being defeated by the Mirith-led resistance army under the Lucky Moon.

Before the Siege began, at the start of year 426, Marali was led by two commanders: Adelphius Kang and Maximus Adams. Elsewhere, the Black Hand was rapidly regaining in strength after their previous defeat in the War of the Poison Forges (425). And further to the south, the Lancaster Wars were raging between the cities of Mirith and Andris. To bolster their position, the Hand formed an alliance with the tyrant Lancaster, helping him to take complete control of Andris. It was during this period of resurgence that Elefin and the Hand began to make concrete plans to take over Marali.

Meanwhile, a certain unnamed Maralian traitor had been plotting revenge against the city’s leaders. The identity of this traitor has yet to be conclusively determined, with the only details existing in the form of Commander Kang's Diary (which was recovered and restored over a decade later). Nonetheless, the extant portions of the diary reveal that this traitor enjoyed a close personal relationship with Commander Adams a few years prior to the Siege. Furthermore, the traitor was known to be a member of the short-lived local terrorist group known as The Creed.

Upon learning of the relationship in 422, Kang ordered General Valencia Falvo to execute the traitor. But Adams intervened, telling Falvo to instead banish the traitor from Marali by penalty of death. Whether the traitor acted alone or in concert with the Black Hand, it is uncertain, but either way, her opportunity to strike finally came with the outbreak of the Siege.

The armies of the Black Hand arrived in full force on the 115th Day of the Bleeding Moon. Amidst the chaos, the unnamed traitor slipped into the fort, brutally murdered both Kang and Adams, and then proceeded to write about it in the final entry of Kang’s diary (almost a quarter of a century later, she still remains at-large). Marali was quickly overrun, and the surviving defenders were scattered far and wide. The streets soon became teaming with the trolls and giants of the Alliance, while the brigands of the Black Hand made their home in the city’s once-proud fort.

Within hours, a ragtag resistance group was formed, operating out of the surrounding forests. On the fifth day of the Siege, a band of resistance soldiers came face-to-face with the Twins at the gates of the city. The Twins had come to offer a bargain: they would reveal critical information about Elefin’s next planned assault on Mirith, if the resistance would agree to surrender and leave Marali behind. At the time, Mirith was the last remaining free city in Oberin, and was now home to refugees from both Andris and Marali. Elefin, armed with the Blood Dagger, had become virtually unstoppable. The Twins also threatened to kill all the resistance soldiers present if they did not accept, and so the resistance had no choice but to withdraw.

With the intel provided by the Twins, Mirith successfully defeated Elefin and destroyed the Blood Dagger. But in so doing, they were forced to leave Marali to the Twin’s clutches, and so began a stalemate that would continue for several moons (Andris, on the other hand, was liberated soon after Elefin’s death). The resistance forces living in exile soon resumed their raids on occupied Marali, however. Many smaller skirmishes between resistance soldiers and the Hand are recorded in the archives, but none of them proved to have any lasting impact. 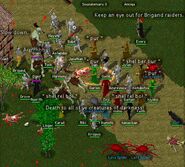 Evers and the liberation force. 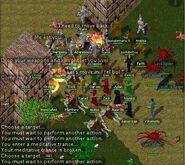 The Recapture of Marali begins. 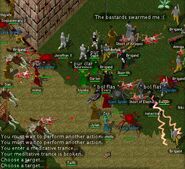 Brigands ambush from behind. 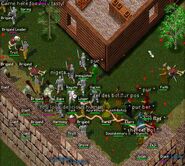 Battling in the streets.

A brigand cleric is defeated.

The temple is liberated. 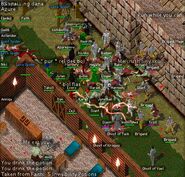 The liberation army approaches the fort. 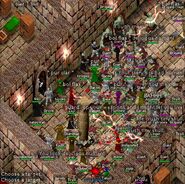 The fight with the brigand mage.

The Twins make their escape.

That is until the Lucky Moon of that year, when plans for the liberation of Marali were formalized. Commander Asliendor of the Mirith Vanguard and Evers, the apprentice of grand mage Seth, led the charge. By means that are currently unknown, they learned about a particular day in which the Twins would be absent, and then they struck.

The ensuing battle was massive. Several powerful brigand leaders were present in the fighting, which raged throughout every corner of the city. Eventually, the last brigand mage was backed into the throne room, and with his defeat, the city was liberated at last. As the day came to a close, the Twins arrived at the north gate, only to find their forces demolished. They fled the city unnerved but unharmed, to fight another day.

The Maralians in exile moved back into their city to find it heavily damaged and defaced. Repairing the walls and the fort would take many moons, and rebuilding their depleted army would take much longer. The city would not begin to be a force again on the geopolitical stage until the conclusion of the Tome Conflict in 429.

Community content is available under CC-BY-SA unless otherwise noted.
Advertisement