Elefin was a wizard from Andris, leader of the Black Hand before Tirana and the Twins.

At first, Elefin infiltrated the very heart of the defenders of Oberin. Beautiful and seemingly weak, she became Asliendor's girlfriend and won the trust of the ranger's friends, as well as of the members of Galandir's court.

It was only when Nafets decided to take the wounded Zexe to the Centaurs that Elefin revealed her identity. Once inside the cave, while one of the Elder Centaurs was healing the Royal Guard with his magic, she produced the Blood Dagger, at the time the most powerful weapon in the world. No one knows how she got the dagger to begin with, neither was this the right time to ask the question. Elefin started by stabbing the Elder, confirming the legend that the murdering of a Centaur would unleash a dark power of catastrophic dimensions. As the dagger was recharging in the creature's blood, the wizard's strength was increasing as well, and she was capable of summoning poison elementals and kill dozens of Centaurs. Not satiated yet, Elefin also murdered Zexe before escaping. It is believed that the only reason why Nafets and his escort survived is that Elefin had not yet had the time to fully recharge the powers of her new toy.

Before the bloodshed, she took the time to explain the reasons for her crime: Elefin used to be the wife of Yadeth, the builder of the Poison Forges, who had been annihilated by Mirith and the Mhara around 425. She was, therefore, avenging her husband, while becoming one of the most dangerous wizards in the lands.

This was but a start. Now the assumed leader of the Black Hand, Elefin made an alliance of sorts with Lancaster. What would she gain from it was never made clear, but her intervention played a fundamental part in the temporary success of Lancaster's plans. First, she came to Mirith with the Twins, in order to take Serene with her and bring her to Lancaster to awake the powers of the Curio. Shortly before, Birek McCalla had been kidnapped by Lancaster's forces. The strongest warriors of Mirith were, on that same day, concentrated in an attack to Andris to recover McCalla, leaving Mirith without defences. Elefin could easily set the keep's bridge on fire, blocking the exit of Galandir, Nafets, Beleth, and the few remaining members of the court. Nonetheless, when the troops finally returned from Andris with McCalla, a frightening battle ensued, where even the king is said to have fought to prevent the Hand from kidnapping the heir of Elara.

That was when a second traitor was revealed: the Duchess Tirana, until then seen as the successor of Galandir, slit the throat of Araine, Beleth's daughter, revealing that she had been working for the Hand all that time. In that moment of shock and pain, Serene was taken prisoner and a victorious Elefin left Mirith with her allies. 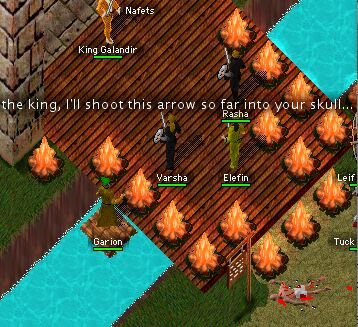 In Andris, Elefin also guaranteed that the barricades would not come down easily: extremely powerful with the energy of the dagger, she was able to cast a spell to seal the gates. That spell was so strong that lasted for a long while after Elefin's death. In Beleth's vault in Mirith, there might still be a sample of a stone he had ordered to be removed from the gate at the time. According to Nafet's records, it was as if the stone had a life of it's own, and a very aggressive one at that, floating in the air and attacking whomever tried to hold it.

However, alliances within the Black Hand do not last forever and, eventually, the Twins got tired of Elefin's leadership. They appeared to a group of adventurers fighting the Alliance near Marali (at the time already under the Hand's occupation) and presented them a the deal to be made with Mirith: the Twins would lure Elefin to the capital, and Mirith would use the Golden Box to deactivate the power of the Blood Dagger, without which Elefin could be killed easily. In exchange, they asked that Mirith would leave Marali alone. It was left implicit that if Mirith did not accept the deal, the Twins would attack them anyway. Between a rock and a hard place, Mirith, the last one standing of the three major cities, agreed to the pact.

It was the rogue Darkstar who volunteered to snatch the dagger from Elefin, a task that she knew would only be possible with Seth's help. The old wizard accepted to come from Brigobaen to Mirith, even if his health was already not at its best by the time, and he had lost most of his memory. Things went according to the plan with the Twins, and, somehow, the leader of the Hand was lured into town, where a battle ensued.

It did not take long before Darkstar reached the dagger. But even after stealing it from Elefin, the blade would still recognise its mistress, who could control it from afar. A battle between the powers of the two strongest wizards ensued. Elefin still managed to make the dagger turn and stab Darkstar, but Seth's words prevailed, and he was able to put the object inside the Golden Box, opening the way for the rest of the people gathered in Mirith to charge against the now weak Elefin, who died shortly after.

Once the dagger was deactivated, it released the soul of Zexe, kept prisoner since the murdering at the Centaurs' Cave. As for Darkstar, she was taken to the castle, badly wounded, under the watch of Zara and Nafets. In the north, Tirana became the new leader of the Black Hand. Nowadays, Asliendor still refuses to talk about any of this.

Retrieved from "https://oberin.fandom.com/wiki/Elefin?oldid=10661"
Community content is available under CC-BY-SA unless otherwise noted.